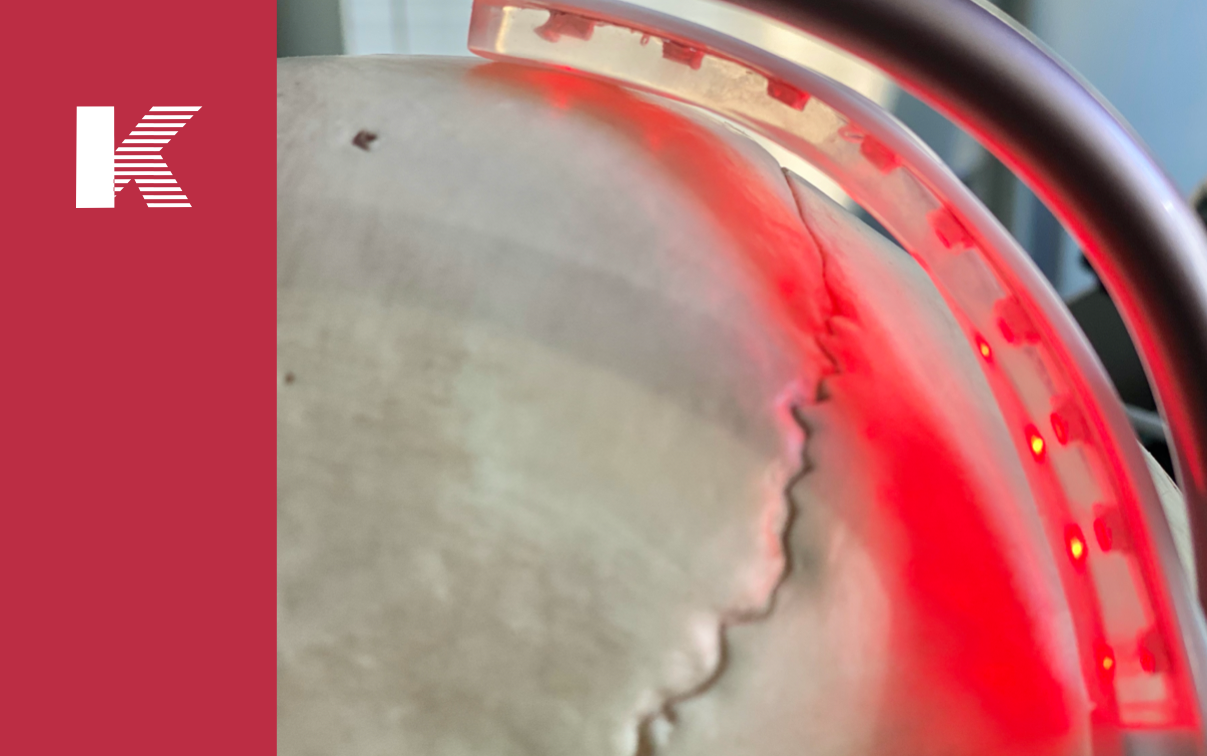 Margaret Jarrett was diagnosed with Parkinson’s disease eight years ago. And although she was bothered by many of the symptoms that commonly afflict people living with Parkinson’s — resting tremor, uncertain gait, and terrible nightmares — the thing that bothered her the most was the loss of her sense of smell. An avid gardener, she took great pride in her roses but being unable to inhale their perfumed scent really got her down.

“You take something like your sense of smell for granted,” Jarrett, 72, said. “You don’t realize how precious something is until it’s gone.”

Its cause is unknown, but it is associated with dopamine depletion and destruction of neurons in the brain's basal ganglia region.

The current mainstay of treatment for Parkinson’s disease involves physical therapy and medications that act to increase dopamine levels in the brain. One relatively new therapy for Parkinson’s is exposure to infrared light.

Dr. Ann Liebert, co-ordinator of photomolecular research at the Australasian Research Institute, has been exploring the idea of using infrared light to modulate the gastrointestinal tract’s microbiome in humans.

The gut’s microbiome — composing trillions of bacteria, fungi, and protozoa from hundreds of different species that normally inhabit our gastrointestinal tract — has come under increasing scientific attention over the past decade, with links being established between the microbiome and several conditions including obesity, type 2 diabetes, cardiovascular disease, and depression. Several studies have also observed that the gut microbiome is markedly altered in patients with Parkinson’s disease. Fecal microbiota transplantation can have a protective effect in animal models of Parkinson’s.

The reason for this is unknown. However, an interesting observation is that another common pathology seen in Parkinson’s disease is the accumulation of misfolded proteins, called Lewy bodies, in the brain. It has been shown that certain sensory cells of the gut contain these same proteins.

Researchers have hypothesized that abnormal forms of the protein could travel from the gut to the brain through the vagus nerve, a phenomenon observed in animal models of Parkinson’s. Further support for this theory comes from findings that people who have had a surgical vagotomy — where branches of the nerve are cut — have a lower lifetime risk of developing Parkinson’s.

“We know that infrared light can reduce Parkinson’s symptoms and offer protection to brain cells. So, we wanted to test if it could modulate the gut’s microbiome as well,” Liebert said.

Provisional results from the first half dozen Adelaide participants, including Margaret Jarrett, have been promising.

“The six patients . . . showed an increase by up to 20 percent in the favorable microbiome that is associated with obesity reduction and short-chain fatty acid production. And the bacteria associated with rheumatoid arthritis, Crohn’s disease and insulin resistance were all decreased,” said Hosen Kiat, a professor of cardiology at Macquarie University, who oversaw the trial.

“For the last three years, I haven’t been able to smell flowers,” Jarrett said. “But several weeks into the trial, I started to smell my roses, daphnes, and gardenias again, and it was wonderful.”

Another participant, Barry Weldon, 70, had a similar experience. “My sense of smell improved significantly,” he said. “One day, I walked into the house, and for the first time in a long time, I could actually smell the soup my wife was cooking.”

Ron Till, 68, had an even more dramatic improvement. “The trial gave me the ability to sleep again,” he said. “It was amazing.”

Till’s neurologist cautioned him not to get his hopes up before the trial but changed his mind when he saw the results. “He told me it was voodoo medicine and probably wouldn’t work,” Till recalled. “But after the trial, I went back for my three-monthly assessment with him, and he said to me, ‘You’re actually testing better than when you first started with me ten years ago.’”

Retired geologist Sean Kennedy, 76, also experienced an improvement in his coordination and balance. “My juggling skills have improved,” he said.

In a review published in Photobiomodulation, Photomedicine and Laser Surgery, Liebert and her co-authors acknowledge that while the exact mechanism by which light therapy alters the microbiome is unknown, there is definite potential in light therapy.

“The ability of PBM [light therapy] to influence the microbiome (if proven to apply to humans) will allow an additional therapeutic route to target multiple diseases, including cardiovascular disease and Parkinson’s disease, many of which have thus far eluded effective treatment approaches,” the paper concludes.

Kiat is excited by light therapy’s potential. “If we can create non-­invasively a metabolically healthier microbiome through this extremely cheap and easy way, then inflammatory diseases and neurodegenerative diseases should be positively influenced,” he said.

Gold Coast-based GP Mark Jeffery is a clinician who has been using lasers in his practice for more than four years. He says the research supports the use of light therapy for a wide range of diseases, including Parkinson’s, Alzheimer’s, depression, and chronic pain.

“The reality is there are no real side effects from low-level laser therapy, and it’s one of the safest treatments you can ever do,” he says.

Liebert says the promising results they have seen thus far will inform a large, double-blinded randomized control trial planned for this year. “It has the potential to apply to huge fields of medicine,” she said.

Weldon’s neurologist, Chris Kneebone, is keeping an open mind on infrared light therapy’s potential. “We all just have to wait and see what the trial results tell us,” he said.

As for Jarrett, she has no doubts that infrared light therapy has helped her. She enjoys pottering around in her garden again and has more energy than she has had for a long time.

“I feel like I could take on the world again,” she said. “My garden has never looked better.”